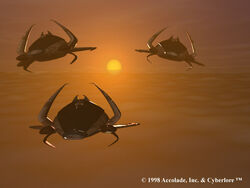 Military Units are the force responsible for the exploration of Gallius IV, for home defense and attack of each Race. Units are developed in different Buildings. Infantry and Artillery Units are manufactured in Factories. Shipyards and Hydroports construct Naval Units. Aircraft Units are built in Airports and Military Airbases. Missile Bases and Anti-Colony Assault Silos manufacture Warheads. Special Units are made in City Centers. Defense Fortifications are constructable buildings that have statistics like all other military units except for experience, though they can have their accuracy value improved by the technology Targeting Computers.

Many factors influence how likely a unit will hit a target in battle. Weapons range, racial advantages and disadvantages, unit experience and territory caracteristics affect the outcome. Experience greatly increases a unit's chance of doing damage.

Choose how a unit will fight in a battle.

All units can accomplish missions, though some are unit or race specific.

Community content is available under CC-BY-SA unless otherwise noted.